A look back, or How far we've come

When you're standing on a floor in a house somewhere, you don't really think about all the stuff underneath. To me, the word "house" describes the structure that encloses the interior space. But often that's the least significant part of it.

At least for the house on Norfolk, there is a whole lot of house under the surface. Since the floors for half the house are slab-on-grade, all the infrastructure has to be assembled and constructed before that final slab of the finished floor is poured. Only then do you frame the house and put a roof on it. This house doesn't have all that much framing because a big percentage of the exterior walls are glass, and a big part of the interior space is open. So there is a huge amount of work that must be done before the "house" -- the structure that rises above the ground -- starts to appear.

Last Friday (July 18) was The First Pour of concrete, and yesterday (July 21) the Adorno crew began stripping the forms. What emerged is just the beginnings of what will divide the interior space from the outside, but more importantly it is the first step in that portion of the infrastructure under the house. Here are pictures in sequence of several parts of the house where big changes have taken place over the past few weeks.

Remember this? These pictures were taken after the retaining wall close to the south property line was finished and backfilled.
June 13

June 17 -- Me standing at the future kitchen island 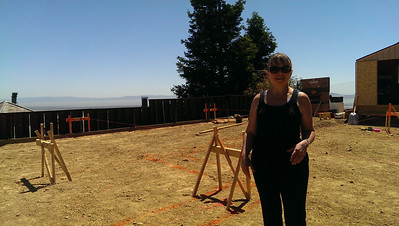 Then we dug it all up!

The Salon (the north retaining wall)

July 17 (day before The First Pour) The Dining Room (the south wall) A lot has transpired in the past couple of weeks. Technically, a LOT of steel rebar has been placed, leading up to the Big Day, July 18, which was the First Pour of concrete. We poured between 80 and 90 cubic yards of concrete, a huge amount for a house this size, and it all went very smoothly, even though it was a nightmare getting those 9 trucks up the tiny little private road from Norfolk. I credit Mark Boyle (the project super), Edgar (the Adorno super), and the great Adorno crew for having everything so well prepared and dialed in that nothing was delayed or went wrong. It was a really spectacular day of accomplishment from 9am to 4pm.

In the week before, Mark Komater and his guys installed conduit and j-boxes, particularly in concrete retaining walls and stem walls: We also had Lunt Marymor out to install some low-level plumbing: And of course the MOST important part, the sample of the integral color for the finished floor. I chose this color weeks ago because I liked it, and once it was poured, the amazing thing was how close it is to the color of the earth beneath the house. It's an exact match; I could make up a whole story about how I worked to find just the right color combination to reproduce that beautiful mustard-colored earth, but the truth is, I picked it off a color chart because I liked it. The soil beneath the house, according to the soils engineer, Bill Langbehn, is called "cretaceous undivided," known in the geology world fondly as "CRUD." This particular area (Area 6) is part of the ancient Orinda formation, which extends from above St Helena to south of Santa Clara, described in Nielsen's book, "Relative Slope Stability and Land-use Planning in the San Francisco Bay Region." I love the fact that building this house is acquainting me slowly and in great depth, with all the details about the house and the earth on which it is being built. And here are the samples being formed:

And the finished product next to the ground it'll cover:

A sample of the color in the footing for the north retaining wall: Here's a great panoramic that Mark took the morning of the pour:

We had nine trucks come in sequence (very well managed, too, so that none of them had to sit turning) up the very narrow curved private road: Those familiar metal rods are chiefly unseen, but they are everywhere. How they get into the hidden world underneath walls and floors and foundations has always been mostly a mystery to me. I've learned a lot about the process watching Adorno prep the site for the first concrete pour. It's cool enough to share.

Monday I spent 5-6 hours at the site waiting on Comcast. Good news is: I got some good sun (it was really hot up there) and we now have Internet, and since PG&E came today, we now have permanent Internet. I also got to watch Adorno build the infrastructure that will be hidden inside the walls of my house.

Here's what it looked like Monday afternoon when I left the job site:

A lot of rebar appeared. The rebar is delivered in a single length; in this case, we got 2 thicknesses, #19 and #25, which is a whopping 1" in diameter, unusual for a residential site.

All of that rebar has to be bent to conform to the shapes of the concrete that they will pour. They also bend it at junctions to create strength at the corners. How do they bend it? Because the whole intention behind this steel rod is that it doesn't bend! Well, they have a machine for that. From what I understand, it used to be a hand-crank, which limited the size of rebar that could be bent. Today we don't have any such restrictions, because the rebar-bending machine is powered by a super-strong motor. Here's the Last Great Rebar-Bender, next to a power-saw rebar cutting tool: The rebar is placed in the groove between the fixed disk and the movable disk. It is adjusted according to a measurement taken at the base of the fixed disk:

Then you just hit the button (on the far side of this photo) and that killer low-torque motor bends the rebar into a pre-set adjustable angle: So how does this formed rebar get placed? Here's a good illustration. These guys are laying up the vertical rebar that will reinforce the north wall of the salon. They start by standing up a piece of rebar and leveling it. The guy below holds the rebar with a hand-leveler to make sure it is vertical.

Then the guy at the top places a cube of lightweight concrete with 2 wires sticking out of one side (they come in 6x6 blocks that break apart) with a screw through the outside of the form that he secures to the rebar to act as a spacer for the rebar: Once he has the bar properly spaced, then he drills another hole through the plywood form and threads a bolt that ends in 2 wires, which he uses to position the rebar so it doesn't move from side to side:

Then he moves on to the next one!

I am fascinated by the precision of the Adorno crew. These guys use lasers, tapes, plumb lines, levels, and all kinds of other instruments of precision, but I watched them over and over again just do this by instinct and eyeball. Look at the wonderful symmetry of the rebar that will form the footing beneath the south dining room wall:

Today they started the curved ramp that will climb 3'8" from the front entry into the public space of the house:

Here's a composite of that curved footing, which is figured geometrically off a single point on the south patio wall:

Lindy was at the site today to do a plan check on several different spots, and Edgar from Adorno measured this one off for us while we watched. It was right on. And the crew just kept working:

This is how it looked when I left:

The Adorno excavation duo was clearing out the pre-existing foundation in the garage. Those chunks of concrete have been there, solid and unmoving, for more than 50 years:

This is a short week with the Independence Day holiday. We're supposed to get a long-term schedule by Thursday. At present, our finish date is still April 15, 2015.

Posted by Unknown at 8:19 PM No comments: