A glimpse of things to come

Building the forms for the footings and retaining walls has given some structure to the house early in the process. Although most of the concrete work that these forms represent won't really be visible, the forms themselves show the outline of the house. At this stage, that's cool. Here are some progress photos taken this week.

The NW salon wall, from the east: 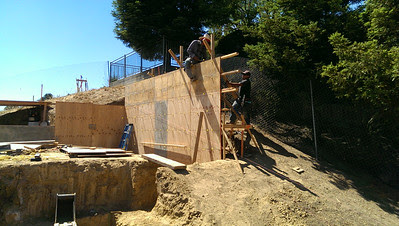 Here's what that corner looked like a mere 8 days ago, on June 19th: 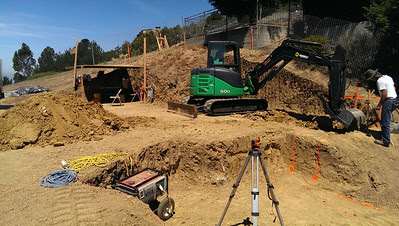 The master bedroom walls went from nothing to well-defined this week: 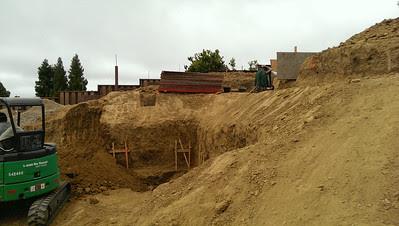 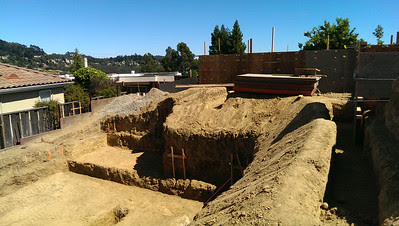 A westerly view on the day Adorno began work: 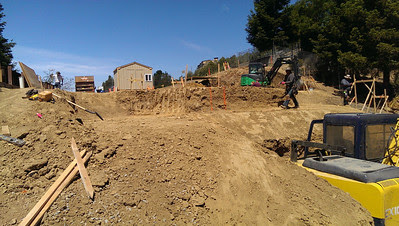 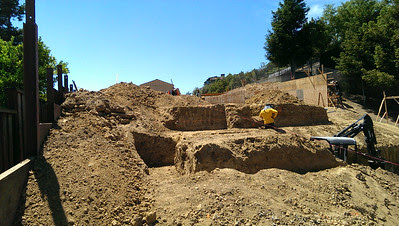 Here's a walk-around of the house as of Friday, June 27th.

This first photo is a slightly skewed panorama of the W wall of the house, taken from the west. This wall is 18' of glass in the middle, right about where that sheet of plywood is acting as a bridge; that little pop-up on the right is a wall, and then there's more glass. The south wall of the dining room, which is in the next photo, is at the far right of this photo.

The S wall of the DR: 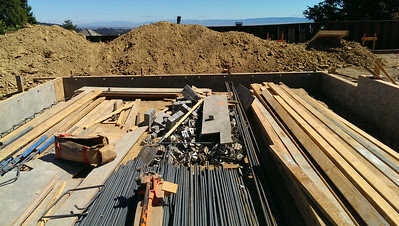 The E wall of the DR and the S wall of the kitchen, which is the threshold for glass doors onto the south patio: 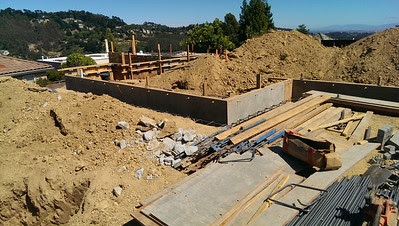 Close up of the S wall of the kitchen: 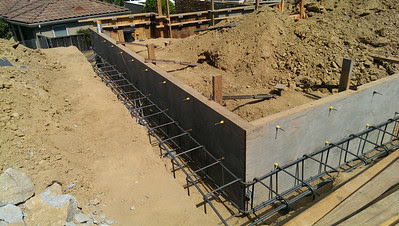 The master bedroom and bath walls. The trench in the foreground is for footing to support a slab-over-foundation floor, which the east half of the house will be: 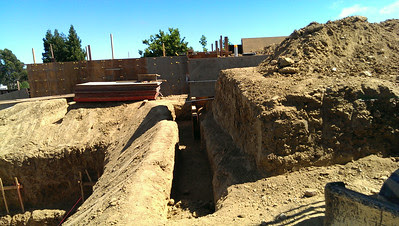 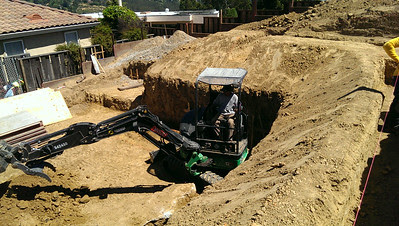 Posted by Laurie at 9:18 PM No comments:

The heavy earth mover left the site today. I was sad to see Stich go, but before they left, I did get to move a little dirt myself: 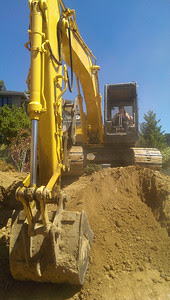 We found some remnants of the foundation of the original house that burned in the 1991 Oakland Hills Fire. That was really the only surprise during excavation, which is great news, but the concrete will have to be removed with a jackhammer: 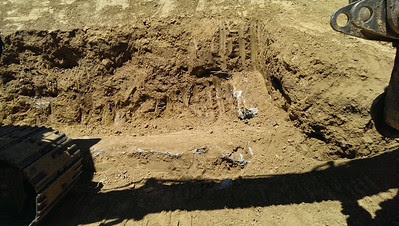 The concrete crew arrived a week ago and began measuring off and laying out all of the exterior walls of the house, which was a big step. Now you can stand in a spot and know what the house will look like around you. Here is me standing at the kitchen island: 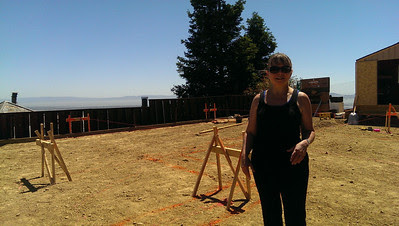 Adorno brought a smaller excavator that they've been using to dig a channel for the sides of the house. Here's the small excavator at work on the north wall of the salon:

Today the once-flat site was again full of piles of dirt and deep channels that make walking around almost impossible. Adorno's crew is building the forms for the concrete that will be the perimeter of the house. Here they are at work: 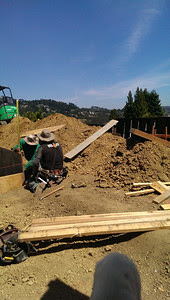 The cool thing is that the general outline of the house is finally beginning to take shape. Here you can see the piano salon/living room/dining room area: 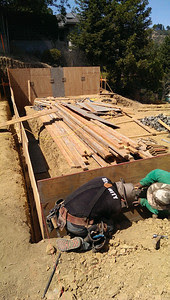 Still no Comcast, although we did finally track down where the cable for the neighborhood is. Still no power; PG&E can't get out to turn it on until July 6th. Still no water; EBMUD wants to know the size of the main, which has to be determined by the guys installing the sprinkler system (REALLY? In a concrete house with a metal roof? Oh please), and they haven't finished their plans yet, because the City hasn't gotten back to them on pressure specifications.

Posted by Laurie at 9:06 PM No comments: 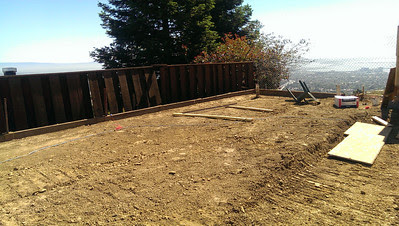 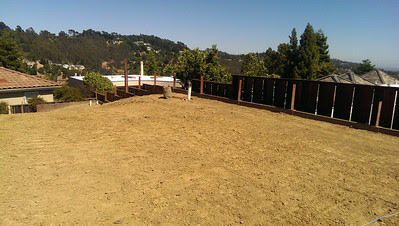 Today we hauled off a couple of truckloads of dirt, and the lot is beginning to take shape. This picture shows the general level of the upper part of the house, sort of under the arm of the earth mover: 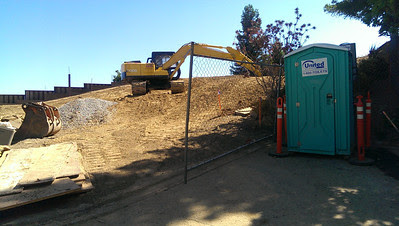 The excavation for the house and the front walkway has begun. The first picture shows the far northwest corner of the lot, where there will be a short retaining wall (the far left cut), and the NW corner of the house (the cut on the right): 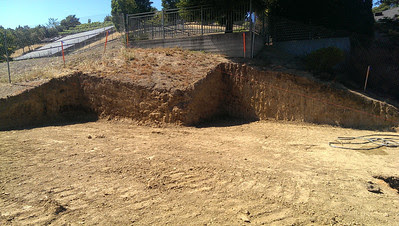 We also made cuts today for the sub-basement in the east half of the house that will be slab over foundation, which you can see in the picture below. The cut on the right is for the retaining wall at the western edge of the front walkway, an elliptical ramp that will climb from the driveway to the front door at about a 1:8 grade. 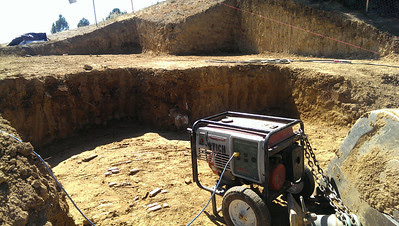 After the concrete retaining wall is built, we'll turn the face of it into something called a "battered wall," which is one of the oldest methods of building a wall. Here is a beautiful example of a Scottish battered wall dated to around 870 AD by coins excavated from the site:

Here's a longer view of the excavation: 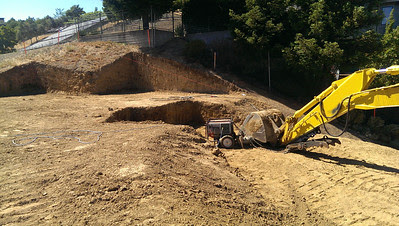 And, finally, we've actually now got a little "house" on the site: Mark's construction shed. He was framing for a west window today. Eventually we'll move our weekly project meetings to the Shed and be able to enjoy that view. 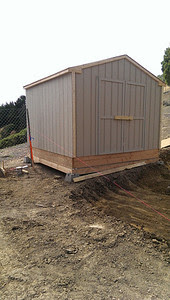 A lot of interesting things start to happen next week. Stich will finish the excavation for the garage and driveway. We'll be laying out the slab for the western half of the house and testing concrete colors. Hopefully we'll get power and Internet next week as well.

More pictures today of the soldier wall. It's actually a pretty cool piece of engineering, with protection against moisture that will make the wood last longer, and French drains to prevent moisture from collecting or seeping under the wall. 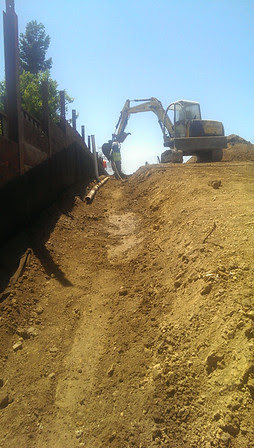 Big pile of dirt will all disappear as they backfill. The entire project calls for only a single truckload of dirt to leave the site. 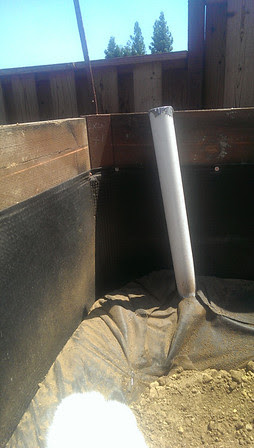 The membrane against the soldier wall and the end of the French drain at the southeast corner.
Posted by Laurie at 4:42 PM No comments:

We thought we'd begin exactly on April 16th, but problems with a neighbor (whose relative is a lawyer) delayed us for another 3 weeks. So we finally got underway in mid-May. Beats me why he wasn't thrilled with the prospect of a brand-new super-duper retaining wall and fence replacing the falling-down version he has now -- which is, btw, completely on my property. Why he wouldn't want me to replace (at my own expense) a fence that looks to be falling down is, actually, beyond my comprehension. But we are going with the flow in order to get the whole project on-track. Which means the pre-existing fence is staying, and we are building a nice new retaining wall next to it.

So, in spite of the litigious neighbor, by the beginning of June we were well underway on Step One: the south-to-southeast retaining wall. 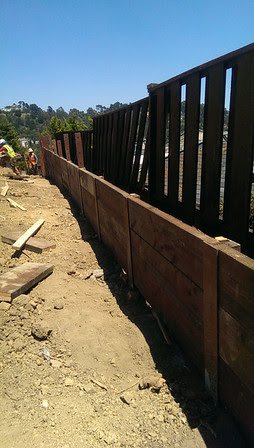 The very next step, amazingly enough, is pouring the concrete foundation/slab for the house. This is tricky, since all of the infrastructure must be appropriately embedded in the concrete. It means that all of the electrical, lighting, plumbing, security, etc., must be finalized before the slab can be poured. What that translates to is some very long planning meetings in the last month.

Nonetheless, we are making progress. Here's a view toward the west, after the Monterey pine was removed in April: 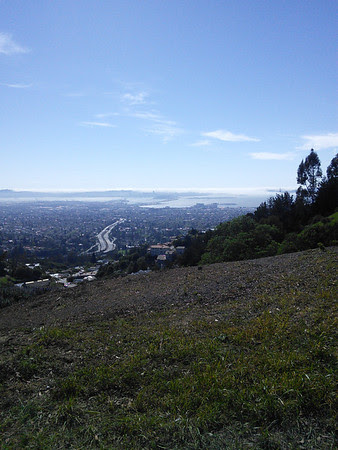 The westerly view
Posted by Laurie at 8:18 PM No comments: